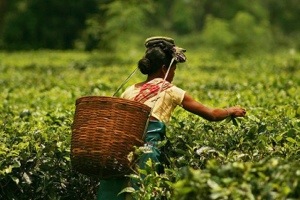 India is famous for its tea, producing a wide variety with regional distinctions. Darjeeling and Assam teas are among the most widely known. India is among the largest tea producers in the world, currently second to China.

First introduced to India by the British in the 1820’s, Indian tea production was initially a British attempt to break the Chinese monopoly. Using Chinese seeds and methods, the British East India Company established plantations in the high, cool region of Assam, at the foot of the Eastern Himalayas. India went on to dominate tea production for a century with most tea being exported to the West. Following a marketing campaign in the 1950’s, the popularity of tea surged within Indian borders. Currently, approximately 70% of the tea produced in India is consumed in this populous nation.

To get one person’s sense of a operating tea plantation, see Sangeeta’s post.